‘The pictures do not tell the full story!’ warned Don Foster. He should know. As Siloam’s Honorary South East Asia Representative, he understands the plight of Philippine emergency victims whom he has known and admired for years. Currently, his work includes trying to meet the urgent housing needs of people still affected by destructive weather.

‘On the Northern Cebu Island, people lived a simple life of rural subsistence. Being very poor, they grew maize and sweet potatoes, eating their crops for survival. That was prior to the horrific typhoon of November 2013 which left a wake of destruction – and devastated lives.

After a few days of uncertainty, Hazel, whom Don sponsors in her business studies at Cebu University, was able to make contact. She comes from a hill village, one of a large family living in poverty. Yet she was able to travel in these emergency conditions to raise the alarm for her community over the Internet. When Don sent money, Hazel purchased quantities of goods such as rice and tinned fish, organised parcel preparation and transport. Then she made the three hour return journey to her church family and friends.

Other volunteers ensured further distribution of goods with Siloam Christian Ministries funding. In spite of their urgent needs, people queued patiently and orderly. Although 180 survival packs were distributed, with only one per family, these basic supplies could not go far. Yet those receiving help asked to have their great appreciation expressed to British donors who came to their aid.

Siloam protects the vulnerable in diverse ways. Working together with social services, a baby and children’s rescue centre provides a safe haven for those at risk as well as rescued victims. Also, an innovative project, ‘school in a cart’ offers everything from food to early education opportunities for children living on the street. Sponsorship is just one way of helping needy youth. Continuing guidance is available for those who complete their studies. Some then go on to sponsor other underprivileged children.

That is why Hazel and others form only part of the bigger picture. ‘When you help a youngster, you’re not just doing something for one individual,’ explains Don Foster. ‘You are actually assisting their family too. In turn, these young people are equipped and motivated to help their community. This becomes crucial as in the current situation of providing housing for typhoon victims who lost so much. That is the hopeful part of the story, the bigger picture – whatever disaster these brave people may face.’

Bishops, tramps – and an aunt with a price on her head

Of course, understanding Don Foster’s achievements also encompasses a wide spectrum of events and spans generations. It seems that Don knew of missionary relatives in his family but had no real interest. Then an especially attractive girl offered him a Bible for his 21st birthday. It led to an invitation to spend time with her father in his rectory.

‘As I sat with him in his study, I just felt I didn’t want to leave,’ recalls Don. ‘Here was a man at peace with God.’ Soon after, he passed away and Don attended his funeral. ‘Bishops and tramps (who had food in his kitchen) were on an equal footing, both in his home and at his funeral. This man had some answers and he made a mark on my life. I knew he wasn’t inside that coffin – he was in a far better place.’

About that time, another influence came through a deceased relative, Merne Graham, who had been a Scottish missionary in the Philippine Islands. ‘I heard that Aunt Merne had been protected by the Philippine people during the whole of the Japanese occupation. These people risked their lives for her because they loved her so much. There was a price on Aunt Merne’s head! It was only when I visited the Philippines some 30 years after her death that I discovered the whole truth of this heroic effort.’

Her influence began with verses she had underlined and which Don took note of too. ‘It was the beginning of John’s Gospel that really challenged me. I recognized that Jesus was not a mere son of God in human terms but that He was God Himself! His journey to
the cross made sense and I realised that my belief in His resurrection was crucial. My life was slowly being transformed as I was becoming a new creature. I wanted to know more about Jesus and to make Him known.’

That meant cancelling the celebration planned for his 21st birthday. It was to be celebrated in a pub and would mean getting drunk. Don knew it was time to make his mark. So he explained to his puzzled friends that he had found a better way to live his life.

Once Don completed his studies, qualifying as a radio officer meant going to sea. But first he took part in a beach mission. He learned to share his faith. Significantly, the company of Christians from varied backgrounds helped him discover that God spoke to people in different ways.

‘These were the beginnings of my spiritual adventure with God which is continuing more than 40 years later.’ After three years at sea, Don joined the British Civil Service, working in South East Asia. He and his wife Pauline have three grown children as well as grandchildren. Taking early retirement, Don has assisted Christian missions in development projects and disaster management. This includes helping BMS World Mission in Bangladesh and Brazil and TEAR Fund in Kosovo and Darfur.

His current work for Siloam involves extensive travelling with help from generous supporters. ‘Because we as Christians contribute to the well-being of people in South East Asia, our faith is respected there,’ explains Don. ‘I have opportunities to speak at meetings with Communists listening to what I have to share because they see our faith in action. And it starts right here in Britain with Christians who are helping us.’

Returning from his latest trip during the dangerous typhoon season, Don insists, ‘Having only one life to live, I must live it to the full!’ He sees it as part of the bigger picture by explaining, ‘So far I have enjoyed this life and look to God secure in His love and plan.’ 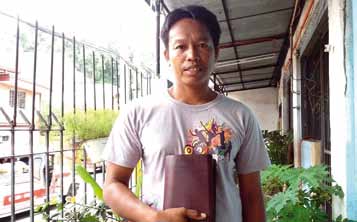