A brief history of why Portugal is in need of social assistance for the very poor.

Portugal is an economically poor country by comparison with most of Europe, even today. And, there has been great disparity between the very rich and poor for many years.

For many decades, Portugal was a dictatorship controlled by António de Oliveira Salazar who controlled his country similar to how better known General Franco controlled Spain. After the ‘Revolution of Carnations’ which occurred on 25th April 1974, over 1 million people fled back to the Portuguese motherland from the former colonies of the Portuguese Empire. These included Angola, Mozambique, Cap Verde, Guinea-Bissau and even from the Far East on the Island of Timor and also Macau off the coast of China. Also, previous to this national misfortune, Portugal lost its colonies in India in 1961 when the Indian Government annexed the former colonies of Daman, Diu and Goa causing many to flee to other Portuguese territories such as Mozambique and Angola. Teresinha, the wife of the UK Director Richard Norton, was first made a refugee from the Island of Goa in 1961 and later she was a refugee from Mozambique in 1975 when she fled to Portugal.

In the past if young men wanted to make a comfortable living for themselves, they had to travel to the Portuguese colonies, mostly in Africa, where they could become quite wealthy working in agriculture or in the mines and associated industries. Only when they thought about their retirement did many of these Portuguese folk think about returning to their homeland Portugal where many were able to build quite large residences known as ‘immigrant houses’ with the money they had made in the colonies. These returning Portuguese nationals became known as ‘Retornados.’

After Portugal joined the EU, vast amounts of money were spent on the infrastructure particularly new roads and bridges, which were badly needed, by funds provided by the EU country members. About this time, Portugal began to experience major debt problems caused in one way by everyone being given the opportunity to own a Credit Card! For a short time, the economy seemed to be booming but for a number of years since property prices have risen so much that many people have been unable to afford or even think about owning their own home. There were many cases of people simply not being able to pay their mortgages, and actually handing their house keys back to the bank who had arranged their mortgages! Rents have escalated as more demand has been placed upon the dwindling housing stock and the poor people who were previously living in shanty towns or ‘baracas’ in and around Lisbon and other major Portuguese cities, are now hidden away in high rise buildings where their social problems have only been exacerbated.

This is why Siloam’s Christmas parcel ministry was established back in the early 1980s. Initially Siloam worked through a number of churches in the more rural north.

Today, Siloam works with Pastor Oscar Segura with whom we have had good fellowship for more than 30 years.

In December 2015, Pastor Oscar Segura retired and stepped down from the church he had established in Malveira and moved to Lisbon to assist Pastor Jorge Jacinto with his church ministry at the Igreja Filadelfia Church. Our outreach ministry project: 038 is now centred on the Igreja Filadelfia with Pastor Jorge Jacinto playing a very supportive role.

At present, we endeavour to provide a gift of €4,000 to the Igreja Filadelfia so that Pastor Oscar Segura who works together with Pastor Jorge Jacinto, to administer this needy Christmas food parcel programme, to the old, the poor and those who are ‘shut-in’ because of ill-health.

Each Christmas parcel consists of simple everyday groceries such as cooking oil, pasta, cheese, sugar, sardines, salami, eggs, flour and a portion of ‘bacalhau’ a delicacy consisting of dried codfish which is traditionally enjoyed on Christmas Eve.

Not only is food provided but also an item of Christian literature which it is hoped provides spiritual food for the recipients many of whom may still be outside the Kingdom of God.

Siloam also provides a scripture text ‘Golden Thoughts’ calendar for the forthcoming year, made possible by a grant from the Trinitarian Bible Society in London.

It is hoped with a simple gift of a life giving food parcel containing an item of Christian literature will make the hearts of the recipients fertile to receive the good news about the Saving Grace of our Lord Jesus Christ.

Thank you in anticipation of your generous support.

We would welcome larger donations by bank transfer to save PayPal fees. To make a donation, please log onto your bank online or call them and use the following details to make a payment: Siloam Christian Ministries, Account Number: 00932329, Sort code: 60-12-35 Bank Address: NatWest, 59 The Parade, Leamington Spa, CV32 4ZX. Please Quote Reference: Project: 038, your Initials and Surname. 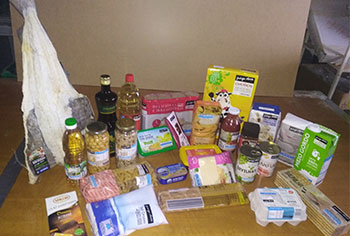 Display of the grocery parcel items. (Note: “Bacalhau” - Codfish on the left). 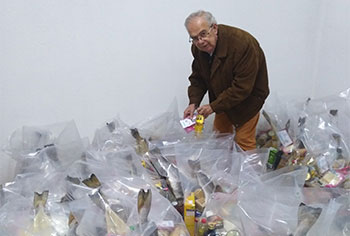 Food items packed in plastic bags ready to be distributed. 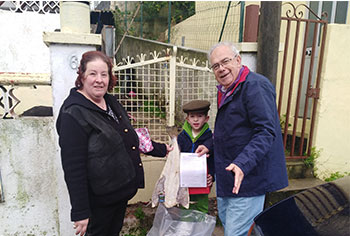 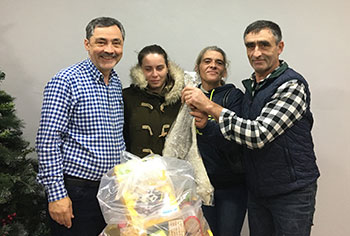 Pastor Jorge Jacinto handing out the Christmas parcels at the church. 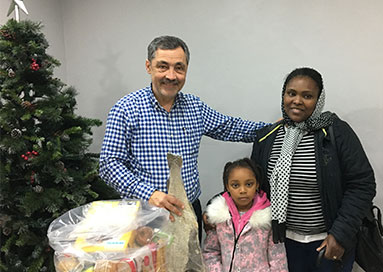 Pastor Jorge Jacinto handing out a Christmas parcel
to a young mother and daughter.