Formerly, Siloam had established a Baby Rescue Centre in 2004 caring for babies who had been saved from the fate of abortion because mothers had found themselves pregnant often as a result of an illicit relationship.  This could have caused these mothers to be treated very harshly by their relatives or even stoned for bringing disgrace on the family.  The mothers were allowed to be cared for at our centre until such time as they gave birth, then they signed their child over to Siloam to be cared for.  This lifesaving ministry continued until May 2017 by which time we had 13 youngsters in our care whom we had saved from abortion.

Sadly, during 2017 it became very obvious that our ministry was not appreciated by the Indian Government and Siloam was heavily criticised for bringing up children as Christians when their mothers were most probably Hindus.  The result of this was that in May 2017, the 13 youngsters who were in our care were suddenly removed and dispersed to several other government institutions.  Sadly, we are not able to know the whereabouts of these precious children and since that time we have lost all contact with them which has been made even more difficult because of the Data Protection Legislation.

As you can imagine our staff were all terribly hurt and upset by this tragic situation which has meant that Siloam has completely lost contact with all of the 13 children previously in our care.

In early October 1990, Rev A M David visited the United Kingdom to minister in a number of Tamil speaking churches in different UK towns.  We have remained in contact with A.M. David over many years since he was formerly a Siloam Pastor in the 1980s before he went independent establishing a Bible believing evangelical church at Porur on the outskirts of Chennai.

During Pastor A. M. David’s visit to the UK in October 2019, he apprised me of his current work and advised me of his ministry helping children with their education needs who came from very poor backgrounds and who attended his church on Sundays.  This ministry was really laid on his heart but he obviously needed additional support to provide financial help to pay the centre educational instructors as well as funds for stationery and simple teaching aids in order to equip these children to have a better learning experience.

At the present time, there are 4 centres totally.  There are 2 centres at Thundalam, one at Metha Nagar and the 4th one at Katupakkam.

Roughly between 14 and 20 children attend each centre where they are helped with their homework by the centre instructors.  The children are also taught lessons from the Bible to help them grow in the Christian faith.

Each centre receives £25.00 from Siloam each month which helps provide the financial support required by the centre instructors as well as occasionally providing funds for stationery like simple pens, pencils, rubbers and pencil sharpeners etc…  Occasionally, lunch bags and water bottles are also provided as these children come from extremely poor families.

Obviously, if Siloam had more financial support designated for this ministry, we could help Pastor A.M. David open up additional centres but we want to move cautiously in expanding this ministry due to the present anti-Christian stance of the Indian Government which deliberately hinders the proclamation of the gospel and discourages those from a Hindu background from embracing the Christian faith.

Due to the current pandemic caused by ‘Covid-19’ the centres are only open spasmodically as local conditions permit. We hope that as the new vaccination programme gets underway, people will be protected  from ‘Covid-19’ and feel more confident about sending their children to the tuition centres overseen by the Porur Evangelical Church. 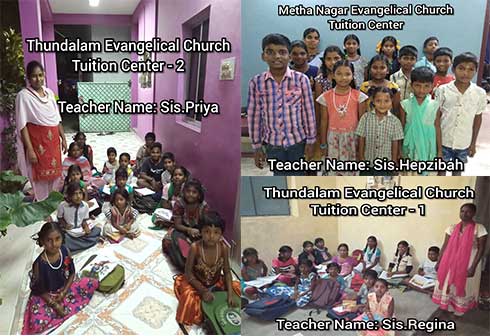 Above the three centres which we are helping through this project.

Want to make a donation by bank transfer?  We would welcome larger donations by bank transfer to save PayPal fees. To make a donation, please log onto your bank online or call them and use the following details to make a payment:
Siloam Christian Ministries Account Number: 00932329, Sort code: 60-12-35
Bank Address: NatWest, 59 The Parade, Leamington Spa, CV32 4ZX.
Please Quote Reference: Project: 021, your Initials and Surname 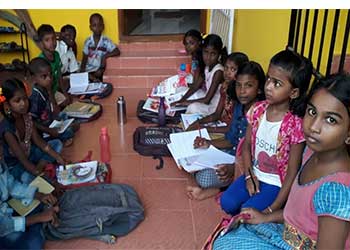 The boys and girls who attend tuition meetings at a pastor’s home. 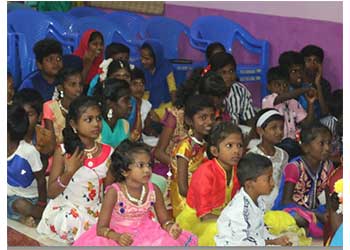 The children and some of the parents who attend the church service. 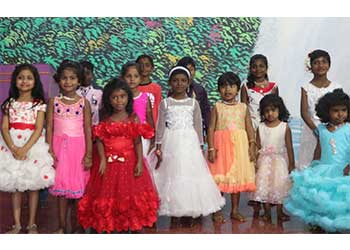 Boys and girls who were acting in a play at Christmas time. 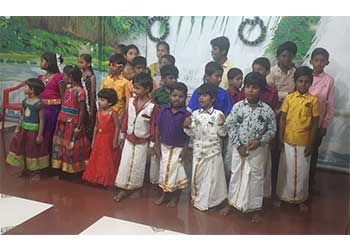 The children with their teacher/instructor preparing for a carol service. 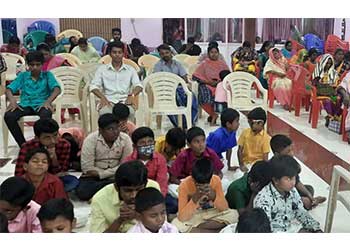 A typical church gathering where many children attend.